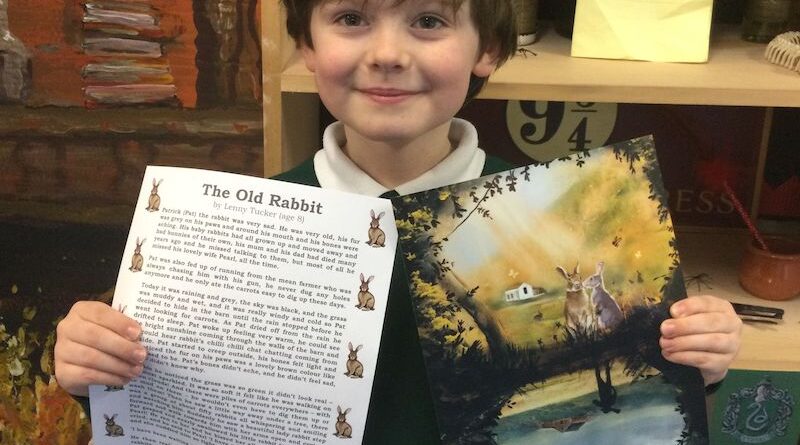 An award-winning story by an 8-year-old boy from Essex that reduced Her Royal Highness, Duchess of Cornwall to tears is being used by the counselling team at Forest Holme Hospice in Poole to help with their child bereavement sessions.

Lenny Tucker’s ‘The Old Rabbit’, a story about an old, tired and lonely toy rabbit called Pat that went to heaven, scooped the Year 3 pupil the silver medal in last year’s BBC Radio 2’s ‘500 Words’ short story competition. HRH Duchess of Cornwall, who was an honorary judge, said “I had a good cry” at Lenny’s heartfelt words, while actress Joanna Lumley read the story live on Radio 2.

The story came to the attention of Kathy Lett, one of the team of counsellors at Forest Holme, who thought it was a lovely way to explain grief to young children to help with the loss of a parent or close family member. The hospice managed to contact Lenny with the help of his head teacher Mr Bryant at Arthur Bugler Primary school in Stanford-le-Hope and not only was he happy to give permission for them to use it but he also had his photo taken with the print-out version Forest Holme will now be using to support children.

Kathy, said, “Our counselling service often gives out story books to families with very young children when someone they love has died, in order to help them to explain the concept of death to their child through a story. When I heard this lovely short story by Lenny, written in such a beautiful way about death, I thought that other children would be able to relate well to it.”

The bereavement counselling service based at Forest Holme provides support and counselling for individuals, couples, children, young people and families before and after bereavement. The Counselling Team consists of three members of staff, two of which are funded by Forest Holme Hospice Charity.

More than 110 youngsters submitted entries across the two age group categories and the final was presented by Zoe Ball on Radio 2. Lenny Tucker, said, “I am so pleased that my story is being used to support other children at such a difficult time. Not only does the story show that anyone can achieve anything it really does help to deal with the loss of a loved one.”