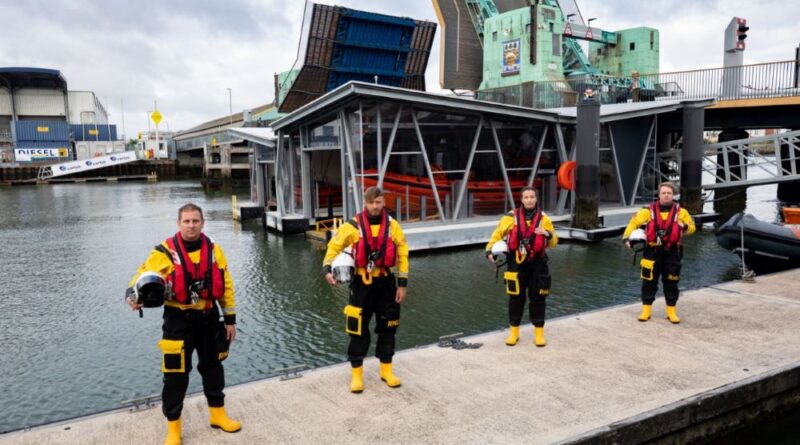 The volunteer lifeboat crew of Poole RNLI will be taking to the small screen this week as they feature in the penultimate episode of the BBC TV series Saving Lives at Sea.

Real life rescue footage captured on their helmet cameras gives a frontline view of how the charity’s lifesavers risk their own lives as they go to the aid of those in danger at sea and strive to save every one.

Now in its fifth series, the 10-part documentary showcases the lifesaving work of the RNLI’s volunteer lifeboat crews and lifeguards from around the UK and Ireland. The series will air on BBC Two on Thursdays at 8pm, as well as being available on BBC iPlayer following broadcast.

Real rescue footage is accompanied by emotive interviews from the volunteer lifeboat crews and lifeguards alongside the people they rescue and their families.

This forthcoming episode, on 7 January, sees Poole RNLI volunteers launch in fading light to a father and daughter being swept out to sea on an inflatable, alongside rescue stories from their colleagues at other stations and beaches around our coasts.

‘It’s great that we can showcase the lifesaving work of RNLI volunteers in a TV programme like this. In recent months, the pandemic has presented us as lifesavers some added challenges, but we’ve continued to maintain a 24/7 search and rescue service. Last year, due to covid, fundraising events have been cancelled and we’ve seen a drop in our charitable income. Without the generous support and donations from the public, we wouldn’t be able to save lives at sea and it’s great to be able to share what we do with our supporters from the comfort of their own home. We need their support more than ever during these challenging times.’

During 2019, RNLI lifeboat crews around the UK and Ireland rescued 9,412 people, saving 211 lives, while the charity’s lifeguards aided 32,207 people and saved 118 lives on some of the UK’s busiest beaches.

Saving Lives at Sea began on 17 September at 8pm on BBC Two, and will continue with the last two episodes in January 2020.