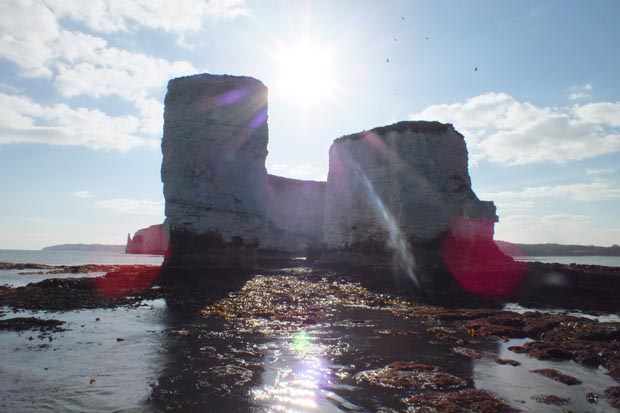 On March 21st 2015 there was an extremely low tide meaning that it was actually possible to walk out to Old Harry Rocks in Studland Bay, Dorset.

This rare opportunity is down to a perigean spring tide which occurs when the moon is either new or full and closest to Earth and coincides with a spring tide.

On March 20th, the day of the Solar Eclipse, there was also a supermoon accentuating these spring tides and as a result the tide went far enough out on March 21st to enable locals and visitors the chance to walk out to the famous rock formation.

If you are thinking of undertaking this walk please be prepared. Please check and double check tide times, remember that most of the time the walk is impossible even if it looks as though the sea is going out and Old Harry is reachable.

Please wear suitable footwear. The walk involves various terrain from slippery seaweed to razor sharp rocks, plus be prepared to wade through water. It will take approximately 45 minutes to an hour to reach Old Harry Rocks from South Beach in Studland so please allow yourself plenty of time.

However once there it is an experience you won’t forget! Not many people can actually say they have walked out to the base of Old Harry Rocks, to be up close to such a famous landmark on the Dorset coast and one that is normally only viewed from above or afar.

Marvel at these impressive chalk formations, touch thousands of years worth of history but please don’t stay too long, make sure you keep an eye on time!

As soon as the tide starts to rise it is essential that you depart from Old Harry Rocks immediately. In fact it is advisable to leave at the peak of the low tide to allow yourself plenty of time to get back. The tide can come in very quickly and you could easily get cut off. Please remember that the ground is rugged, slippery and wet so it can take a lot longer than you think. 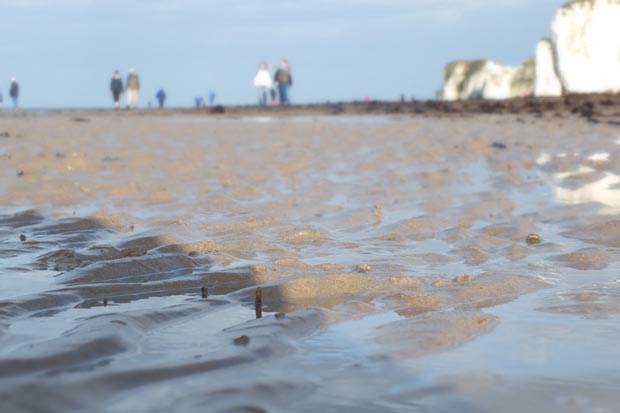 On this occasion we left South Beach in Studland at approximately 2.25pm and arrived at Old Harry at 3.15pm. To be fair we could have left a little later to allow for the tide to go out further, and possibly make the walk out a little easier, but we were keen to be the first there! Once at Old Harry we were able to stay for around 45 minutes. We started making our way back at 4.00pm, 12 minutes before the peak of the low tide at 4.12pm. As expected the route back was easier than the walk out due to the tide being further out but beware that the sea can be very deceptive and the tide comes in very quickly. Do not leave it too late! Later that day four teenagers had to be rescued after getting cut off by the tide coming back in, a sure sign of how dangerous the sea can be.